I deleted fifteen drafts from my blog this morning. Some of them, I’ve been keeping around for nearly six months. Clearly, I would never write them. 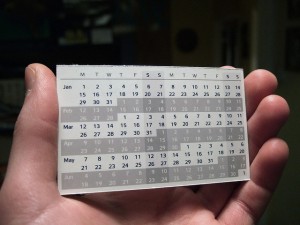 It’s liberating, every now and then, to ditch the expectational debt of having too many unfinished drafts and move on. I don’t think we give ourselves enough chances to do that.

Drafts have their place, certainly. Setting things in motion, marking down ideas – these are good practices. However, living perpetually from drafts seems to make reacting to live events hard. How can we talk about news, if our post for today is already in the queue, and we’re unwilling to shuffle the queue back because we have a schedule?

In doing the editorial and SEO work for Hard Refresh, I’m now finding that working a draft from start to finish effectively takes practice. Nic and I are getting a decent queue of articles there, but we do still have some drafts – they’re not bad things by nature, but they do suck up a lot of cycles unintentionally. Being able to call something finished shortly after starting it is important; letting your brain stew on a half-formed idea while at the same time trying to keep the original idea’s form is not.

When considering your editorial calendar, drafts can save your life. Or, they can make you completely bonkers because your half-finished ideas starve the rest of your creative process.

Some practices I’ve found to help when dealing with drafts:

Doing this for my project blogs has helped keep me significantly less stressed over publishing. While it’s led to less writing here, it’s certainly led to better writing there – and better writing is what the job’s all about.

How do you keep your sanity without completely ignoring the idea of a draft?