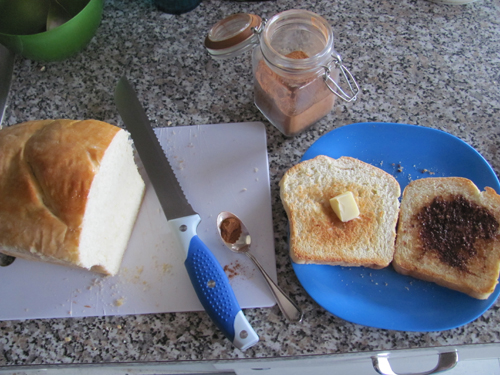 Have you ever made cinnamon toast? No? Wow. Let me tell you – it’s not the most fun thing in the world to get wrong the first time.

See, most people start off the fearless way. They think “aw, yeah, cinnamon on hot bread!” and stop there. Some butter, some spice later, they’re left with a bitter, mouth-belabouring mess that is a general discouragement against further experimentation.

I’m betting the failure rate is about 95% for first-time toast-masterers.

Success rate for people who get beyond the first fail and try again? Probably 70%. This isn’t based on a fancy manufacturing management process or anything – it’s human logic. Got bitter toast, but want not-bitter toast? Simple answer; add sugar.

Sugar? Really? Yes. However much cinnamon you think you need, add the same amount in sugar – makes for much better toast. I think I was on my seventh or eighth set of toast before I got the ratio right – and it turned out to be really simple. But that’s just me.

Your success/fail ratio is different than your neighbour’s is.

What’s more interesting, your success/fail ratio isn’t the same as it was last time you tried. Success gets easier as you practice. The more often you do something, with more attention to the details that led to previous lack of success, the easier it is to move the process toward success.

One of the things my many cinnamon toast experiments have taught me about success/fail ratios, is that there’s an expectation of “mediocrity” that eventually follows accepting success.

Once you know you’ve done something “well enough” – how hard can it be to find a better way unless you need it? Things like lacing your shoes, tying a tie, or preparing some toast. Success, in these cases, is often measured by way of “acceptable/not acceptable” rather than “optimum performance.” We even treat our health this way, believing that the absence of symptom equates to wellbeing.

Let’s jump tracks. Are you treating your online work the same way?

Are you writing the best possible blog posts? Are your tweets the best use of 140 characters? Do you have every subscriber you’ll ever need or want? Are you leveraging every opportunity to get better in an intelligent way?

Is your business “big enough” or just “big enough for today?” Are you being paid enough to say you never want a raise for the rest of your life? Is your house perfect? Your kids learning everything they need to at the pace that will set them up for a perfect life?

Let yourself get better. Yes, it’ll take practice. Yes, you’re going to end up with some bitter toast. But if you’re always optimizing, always ahead of the details and minding the ratios, you’ll be better every single next-time.

Go ahead. Make some toast.