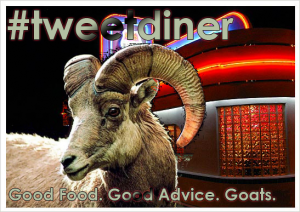 Tonight, Nic Wirtz and I cohosted #tweetdiner (it was my second run at this – last time, @MyAgenda and I took the reins) – thanks to Earth Hour crossing the continent just as we began, it was a small, tightly-knit crowd in the chat. Made for a lot of depth which, ironically, was a bonus to the subject.

As with any twitter chat, I’ve missed things – that’s what the transcript is for (read it all, no tl;dr allowed)

The questions were fairly simple;

What are the signs that you’re suffering from social media fatigue?

Some diversity in answers here; I mentioned an increase in effort, Nic feels he gets crabby when he’s fatigued with something.

Also, finding that the time it takes to realize that arguments you’re making are pointless, or finding that more often what you say is not advancing the conversation can be a clear sign of fatigue. When we have high energy, natural optimism often helps us continue to persevere in difficult discussions.

What steps can we take to overcome or avoid social media fatigue?

From a comment by Daniel Hewitt came: Taking a break can work in the short-term but what if that is not enough?

Daniel mentioned he goes into “Airplane Mode” – a reference to turning off his connections. Occasionally this does mean missing some things – big events, scheduled things. However, the corollary for this is that perceived consistency (in broadcast) is often just as good as real consistency.

For example; one could schedule a number of blog posts, tweets, and other push messages for the sake of taking a few hours – or even a few days – away from the keyboard.

Do you have a long-term plan for your social media usage?

Joe’s point is that so many goals set in social media are blinds. They appear to be long-term, but can’t be sustained; they’re “build a house” tasks, not “run a household” jobs. So how do we set goals? Joe mentioned that some metrics-based goals are useful for building upon, but relying exclusively on statistical goals is weakening.

Personal note; having been working with online communities for twelve years, this is the first year I set myself any goals as far as actual involvement and activities go. Oddly, having the goals (even if some of them have already proved wrong) has led to less struggling and grasping for ideas.

final note; watching the numbers is a zombifying experience, and an incredibly easy trap to fall into regarding goal setting.

What one thing would improve your social media experience?

This one got crickets. I think it’s hard for people to nail down “that one thing” with social media. which isn’t necessarily a bad thing.

We ran out of time, so I tossed these out at the end – if you have any comments about the last two questions, please leave them here.

Do you find it’s difficult to promote yourself consistently, rather than just puttering?

Which app do you find you spend the most time on? Is it a web version of a platform, or a mgmt app?

For those reading here: How often do you take what you’ve learned in chats and create an action plan because of them?