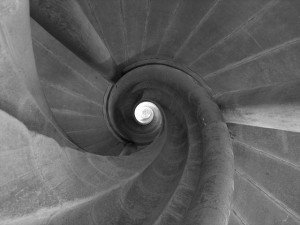 We’ve all heard the classic form of this problem – correlation does not necessarily imply causation. But, even knowing this, how often do we fall for it?

The internet followed where ARPANET began.

The internet became a craze in the late nineties.

LiveJournal followed on the text-file blogging craze of the mid-nineties.

Facebook followed on the heels of LiveJournal, and other networking platforms.

These are some really appealing matches to make, because they appeal to our immediate, emotional logic. Of course Twitter followed Facebook – it was a stripped down version of the same thing, for basically the same purpose. But was it? Similarly, did Facebook follow any other social network before it, or was it something new, bred from similar stock?

Take it a step further – if you tweet this post, share it to your Facebook stream, or give it a +1 or a share on Google+ – does it immediately follow that my traffic will increase? Further still – if I hadn’t posted this entry, would my site be getting any traffic today at all? Not necessarily – while I’ve been on an unintentional blogging hiatus for most of July, my traffic has only dipped a small amount, and my posts have been getting shared without my involvement. I’m not the only one to see this kind of behavior – Justin Kownacki did some forensics on his blog traffic when he got back into the blogging game, finding that traffic still happened.

So why do we post new articles? Why write on blogs at all if traffic does not necessarily follow?

Because there’s no black or white; new blog articles might mean immediate explosions of traffic.

They might get shared immediately, strike a nerve, and go viral. They might also take some time to gain uptake, and become search placement assets instead of social communications assets. We might also remix them eventually, with enough input from eventual comments, and build books or education pieces or seminars out of them. There’s no end to the usefulness of a large library of media assets sitting behind your domain. This applies whether you’re a well-meaning private person, or a multinational corporation. There is always potential, when information exists, that would not have existed if the information had remained unpublished or unused.

It’s so easy to trap ourselves into thinking either post hoc ergo propter hoc never applies, or always does; never anywhere in between.

After all, if I hadn’t a very large bank of past posts – nearly 400 at the moment – the natural search traffic and subscribers I have been gaining in absentia of new writing would not have existed. The ongoing interest in the history on my site wouldn’t have spurred me into thinking it was worth taking up the torch again – and I’m betting you might be in the same situation.

It’s about taking a long view, and in some cases ignoring the immediacy of natural steps to find the roots of current situations.