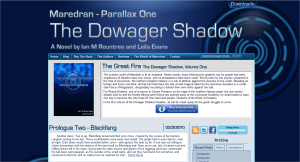 In the last week, I’ve read articles in a half dozen places about setting and managing expectations. As I haven’t said much in a while about what this blog is for, why I write, or how I try to make the blog accessible to everyone, I thought it might be time for some expectation setting of my own.

I blog in hopes of creating some conversation and encouraging thought about the things I write about.

Whether it’s making the most of your tools (like turning your WordPress blog into a personal event manager), or making the most of your writing (by enhancing your mastery of the writing voice), I want you to do better work – and, of course, I want to do better work myself. I’m hoping we can talk about that, and find ways forward together. This is part of why I comment on your blog as well – hoping to continue the conversation.

I also want to make it easy to get to what I’m writing.

As such, here are the ways I make my blog available:

I try to post on a schedule as often as possible – you can rely on most of my posts to appear at or around 6am CST, when I’ve written something in advance.

I import to Twitter – @IanMRountree – through Twitterfeed, so my blog posts pop up automatically even if I’m not there to post them when they’re scheduled.

I have, of course, got a feed. Subscribe through a reader or by email to http://feeds.feedburner.com/IanMRountree – there’s an email subscription entry box on the right sidebar if you’re reading this on my site. Getting the feed is a good way to not miss things.

I also publish the feed automatically to Facebook. For years, it’s gone to my personal profile through RSS Graffiti, but I’ve decided to up my accessibility a little and set up a page for my blog. If Facebook is a place you look for news beyond your friends’ updates, please go like my page – it’s available here: Ian M Rountree – Blog

That’s all I’m doing just now. Have I missed anything? Are there places you look for news that I’m not using which would make it more convenient for you to get connected and keep up? Let me know in the comments if there’s somewhere I should be publishing that would help you reduce the effort needed to subscribe.

Many of us who work in media – whether as publishers, producers, marketers, or evangelists – create stories around the work that we do. It’s our job to create tales to interest people, to gather attention and, in most cases, sales or contracts.

As creating media becomes easier, businesses – and business owners and employees – are creating more of their own media. Many don’t have the background that professional media workers do, and as a result, are prone to mis-step.

We perceive these mis-steps most easily as inappropriate disclosure, poor personal judgment, or a lack of self-censorship.

But we also counsel businesses that talking only about themselves, about their business, and the benefits of their work is a bad idea. Why?

Watch this video. Award-winning novelist Chimamanda Adichie speaks about the danger of the single story.

If your drunken photo is one story of many – well, you still might want to rethink where you leave your camera. But people are a lot more likely to take the detail in stride at the value of what it is; a detail, not a whole picture.

It’s not just about how you tell your story. It’s about what stories (plural please) you’re telling, as well as how.